Media and Communications Officer Chlӧe Smith was given a rare opportunity to join the crew on an observer shift to see first-hand what the day in the life of a Critical Care Paramedic. Here she recounts her experience:

We often talk about mission numbers. Each day I look at the places and incidents the crew have been tasked to the previous day. It’s just a few very brief details listed on a piece of paper- nature of incident, time, and location. It’s easy to forget each number represents a person. And each person has a story. When the crew attends to someone who is seriously sick or injured, it’s never just one person. It’s the family, the friends, sometimes even the whole community that can be affected. I wanted to get an insight behind the numbers, to get a sense of what it is really like. 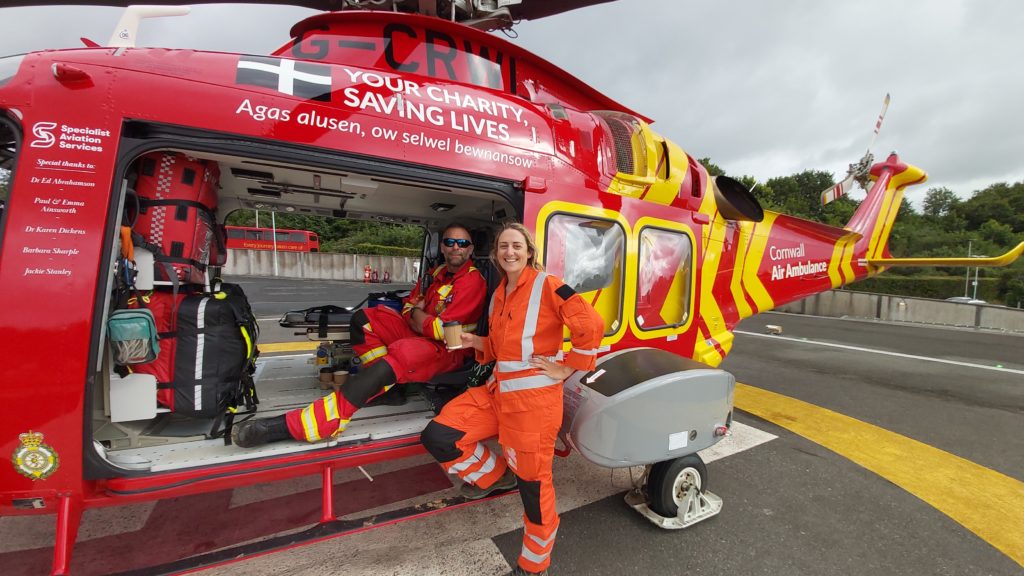 I joined Critical Care Paramedics Steve and Stu, along with pilot Richard, as an observer on the early shift on Friday 6 August. To head out with the crew I had to have a safety briefing, ready to fly in a helicopter and wear the full flight suit. You’ll see from the photos as an observer I’m in orange- I certainly didn’t want anyone confusing me for a highly skilled paramedic on scene! I should say in my day job I meet patients who have been helped by the service. I’m lucky enough to hear and share their incredible, sometimes miraculous stories of survival. But I’ve never seen the patient at the point of need and I knew a shift with the paramedics would help me to understand the whole journey a patient goes through, from the point of the incident to recovery and where eventually they might feel ready to contact the charity.

The crew never know what calls will come in, so I was unsure what to expect when I joined them for the start of the shift at 7am. But given it was the start of the summer holidays, I thought it might be busy- and it certainly proved to be. No sooner had the pilot finished the daily helicopter checks at 7.15am, the red phone rang. First call of the day was a motorbike accident on the A38 near Bodmin. As we jumped on board and headed East- I was amazed at just how quick the flight was. In under 10 minutes we were approaching the area, looking out for the scene of the incident. Duty pilot on shift that day, Rich, told me what he is looking out for when they get overhead. 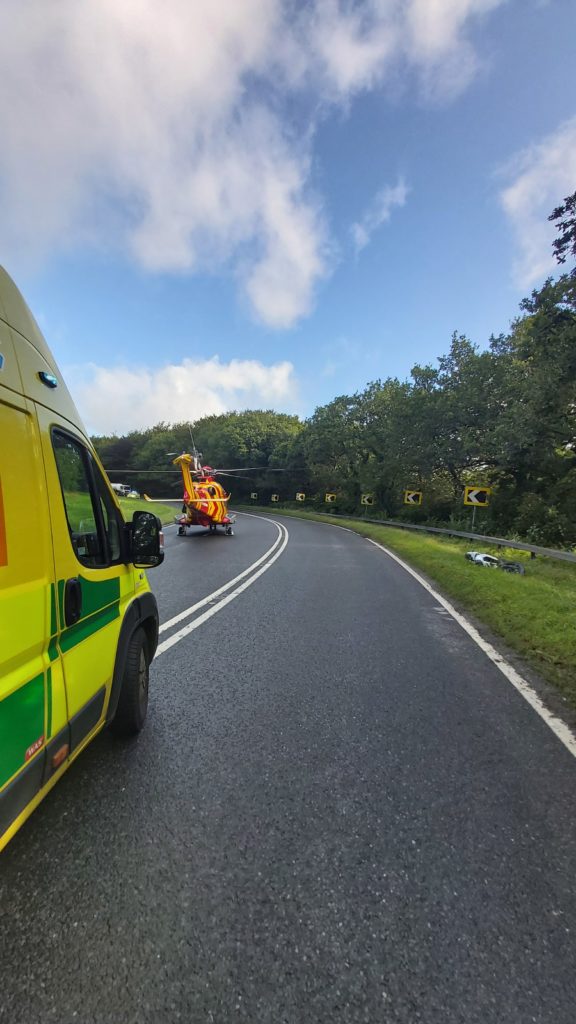 “The size of the site, wires, any possible obstructions and wind direction are all things we consider before landing. In this case, the road was very busy with morning commuters, we had to be sure the police had closed the A38 in both directions. When you’re landing on a road, although it can be narrower than other sites, there tends to be fewer obstructions- there’s no people or wildlife and you know you’re landing on solid ground.”

With the road closed, the scene was very quiet. The motorbike rider suffered an open fracture on his ankle and was visibly in a lot of pain. Stu and Steve administered ketamine to the patient, while they manipulated his foot and put his leg into a splint. Due to the nature of his injury, he needed to be transferred to Derriford Hospital for an operation. In the back of the helicopter, Stu had to contend with engine noise while on the phone to the emergency department (ED) at the hospital to give them a status update. Eighteen minutes to the helipad at Derriford- the paramedics handover the patient to ED, while Rich picked up the coffees (much appreciated as no one had breakfast!)

As we lifted from the hospital to head back to base, SWASft control room radioed in with another job. There was a quick refuel at Newquay Airport before we headed out to Wadebridge, to an elderly woman who was found unconscious at home. We landed at Coronation Park at 10.40am, where we are met by a police officer Amy. She drove us on blue lights to the scene of the incident. It was ev 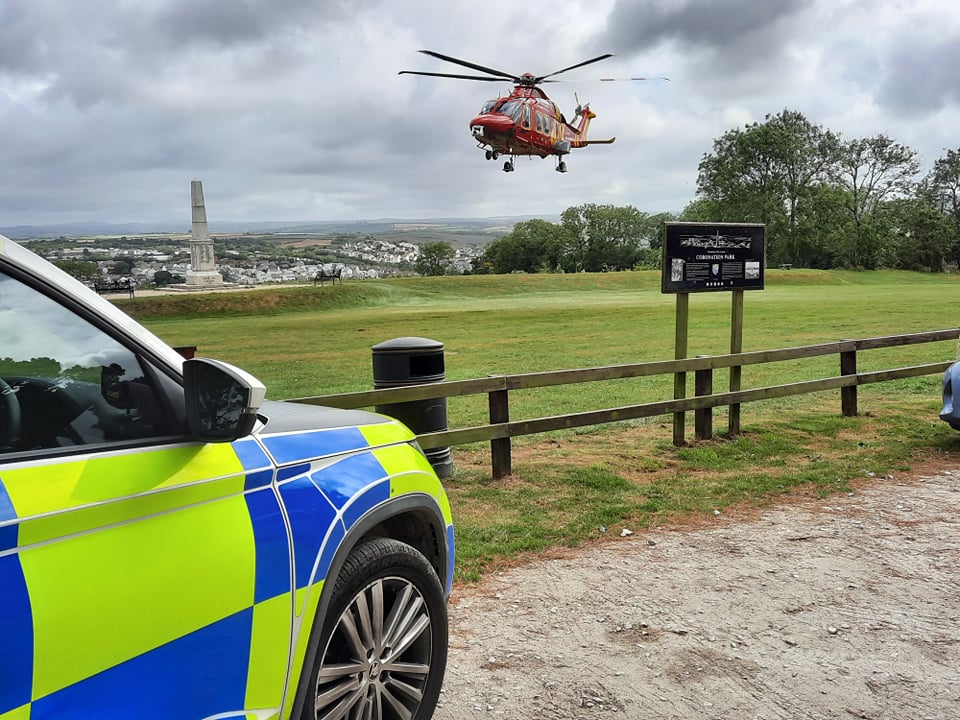 ident just how closely all the emergency services work together to help patients. When we got to the house, there was a land ambulance crew with the patient. Her vital signs were very poor, she needed to be transferred to a hospital quickly. The patient was taken by ambulance to the waiting air ambulance. As we got into the helicopter, Steve was in the back (the paramedics switch roles throughout the day). The patient was very poorly, Steve looked up and mouthed: “I wish there was more we could do for her.”

As the crew met back on the helipad at Treliske, it was 12.30pm- we thought we might be able to head back to base for lunch. No sooner had this been spoken aloud when the radio went again, this time it was for a violent incident in Polperro. With reports of two casualties, control also dispatched Devon Air Ambulance to the scene. Everything happens very quickly when there’s a major incident. Stu immediately changed into level 3 PPE- which looks a bit like a space suit- not the easiest thing to do at 1,000ft. He was already preparing for the type of injuries they might encounter- such as traumatic arrest- he told me it was likely to be a difficult scene to attend. Meanwhile the team were in constant contact with control for updates, while Rich established contact with the pilot from Devon. 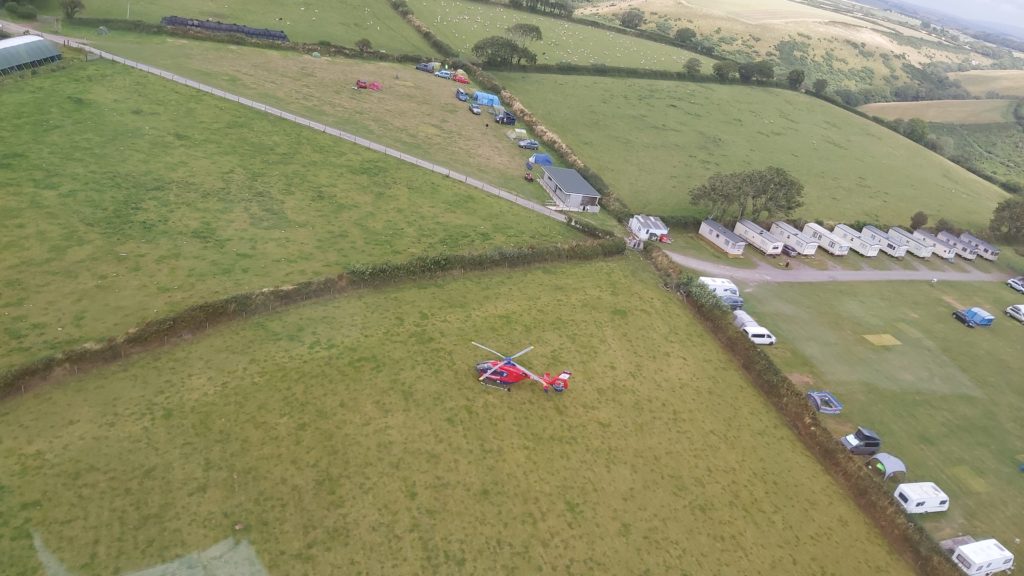 As we approached Polperro, we can see the Devon helicopter looking for a landing site. With lots of coastal towns in Cornwall situated in valleys, it can often be hard to land right at the scene. Both helicopters landed side by side at a field at the top of town. The team got the update to stand down, unfortunately both casualties died from their injuries. It made me wonder how the paramedics must feel- a huge surge of adrenaline, then they are stood down. I remembered what one of the crew told me before, ‘sometimes it’s not what we go to, but what we are prepared to go to’, suddenly that made a lot more sense.

The final tasking for the day shift came as soon as we lifted from Polperro- it was a cardiac arrest in Fowey. Rich landed in a playing field, this time it was about a five-minute run from the site to the patient’s house. And I mean run, which is not easy while you’re holding a monitor with a 20kg bag on your back. Stu showed how experienced he was at jumping fences- anything to save time. The survival rate for out of hospital cardiac arrests is fewer than 1 in 10. Sadly, despite the best efforts of all the clinical team involved, the patient did not survive. Being there to witness the moment someone loses a loved one was difficult. But seeing first hand the incredible work involved to try to save a life was humbling- everyone works together to do the very best they can. 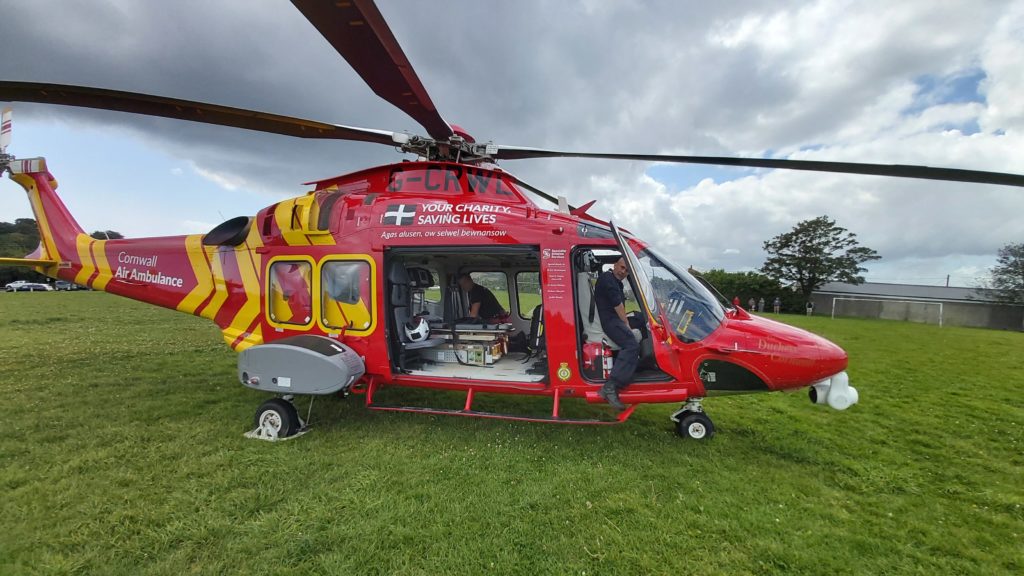 We returned to base just before 3pm, but there was no time to rest just yet. The crew must refuel the helicopter and restock the kit bags ready in case the phone rings again. A cup of tea was never more welcome. Jumping in and out the helicopter, assessing landing sites, treating patients, making important clinical decisions- it’s all a day’s work for the aircrew, but it was an eye opener for me who is used to working behind a desk. Steve summed it up well: “It’s relentless at times. Particularly in the summer when its busy, you’re on back-to-back jobs, it can be a very demanding job. Some days you can’t always help everyone, but when you do make a difference in someone’s life- that is what makes it all worthwhile.”

For me it’s back to the office, but with a renewed sense of appreciation for the work the aircrew does every day.

If you have been helped by the crew of Cornwall Air Ambulance, Chlӧe would love to hear from you- email chloe@cornwallairambulancetrust.org.

You can support the work the crew of Cornwall Air Ambulance does every day here.