Cornwall Air Ambulance has been shortlisted in two categories of the 2022 Air Ambulances UK ‘Awards of Excellence’.

The annual awards, sponsored by Airbus, celebrate and recognise the specialist lifesaving skills and commitment of those working tirelessly within and in support of the air ambulance community.

This year Cornwall Air Ambulance is in the running for two awards: Charity Team of the Year and Special Incident.

In October 2021, the Cornwall Air Ambulance AW169 helicopter and Specialist Paramedics in Critical Care Lisa Ball and Pete Storer were called to a rescue on the coast path at Nanjizal, near Land’s End. A young woman had fallen 100ft from cliffs and into a ravine on the beach below after suffering a seizure. Pete and Lisa made their way down through thick gorse, clambering down rocks and onto the beach, carrying vital drugs while the tide was coming in. The patient was face down in the water and unconscious with a head injury. With the sea state worsening she needed to be evacuated to dry land. Despite the crashing waves and risk to themselves, Pete and Lisa stayed with the patient and her mum, using their bodyweight to pin them to rocks. The Coastguard Search and Rescue helicopter arrived and was able to winch them to safety. The patient suffered a cardiac arrest and was in hospital for nine months, now almost a year on she suffers fewer seizures than before the incident. Pete and Lisa have been shortlisted for the Special Incident Award.

Meanwhile the charity’s retail team have gone above and beyond to keep our shops trading over the last 12 months, despite many difficult periods. During the national Covid-19 lockdowns many shop staff were furloughed, and volunteers stood down for months at a time, as retail stores remained closed. Once open, they were often understaffed but the team worked tirelessly to make the stores safe for shoppers and even managed to open a new superstore in Bodmin, complete with dedicated community space, which opened in June last year. Despite added pressures, the retail team have continued to support the charity at many other events throughout the year. They ran a stall at the Royal Cornwall Show and at the charity’s first ever Helifest event in July 2022. They have now been shortlisted for Charity Team of the Year. 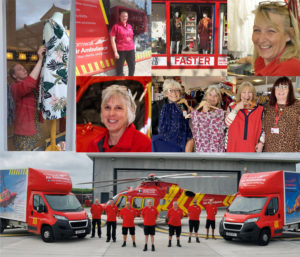 Tim Bunting, Chief Executive of Cornwall Air Ambulance, said: “Everyone at the charity is incredibly proud that we have been shortlisted for these two awards. Our retail team went above and beyond during the pandemic and continue to do so, the charity could not operate without the help of our team of volunteers. To have Lisa and Pete’s actions that day recognised is so incredibly important also. It really does showcase how the crew help people across Cornwall and the Isles of Scilly, they undoubtedly saved two lives that day.”

The awards ceremony is being held at Edgbaston Stadium, Birmingham, on 14th November and will include a wide range of speakers covering various areas and topics. This year is the first time since 2019 that it will take place in person.

Simmy Akhtar, Air Ambulances UK CEO, said: “Congratulations to all those who have been shortlisted after long and hard deliberations from our independent judging panel all of whom have volunteered their time to support the recognition of our air ambulance community.  Thank you to all those who submitted awards nominations and we look forward to welcoming colleagues to our in person Annual Conference and Awards later this year”.

It costs nearly £5 million every year in charitable income for Cornwall Air Ambulance to provide lifesaving missions. We receive no direct government funding and all the money we raise is from the generosity of the people of Cornwall and beyond.

To find out more and support us, visit www.cornwallairambulancetrust.org or our social media pages.