The crew of Cornwall Air Ambulance have been tasked to over 850 incidents since the outbreak of the Covid-19 pandemic.

New figures revealed by the charity show the helicopter crew were as busy as ever in 2020, despite the county being under restrictions for much of the year. From 23 March 2020, when the government announced the first lockdown, until the end of the year the crew were called to 457 trauma-related incidents and 396 medical incidents.

Steve Garvey, Air Operations Officer for Cornwall Air Ambulance, said: “As you can see from our latest mission report, serious illness and injuries don’t stop in a pandemic. We responded to many of the types of incidents we would routinely attend in any given year, such as cardiac arrests, strokes and road traffic collisions. The added challenge of course, is that it was not a normal year. We had to make a lot of changes in 2020 to how we operate, both medically and from an aviation point of view, to ensure the safety of our patients and crew. Covid-19 has added a layer of complexity to all the incidents we attend.

“It has also been challenging on a personal level, working on the frontline whilst worrying about your own family and the added issues each lockdown brings. I am proud that the team here has been able to adapt and continue to provide the air ambulance service to the people of Cornwall throughout this pandemic. And thanks to the generous support of the public, will continue to do so.”

The total number of incidents for the year 2020 was 1,061. This included calls to 326 cardiac-related issues, 166 road traffic collisions, 156 injuries which occurred in a fall and 27 from sports-related activity. The aircrew also responded to 25 incidents involving patients with serious burns.

One of these was 33-year-old Scott Halliday who was badly injured in a fire in St Ives in August. Scott was working at a harbour front restaurant when he was engulfed in flames after a deep-fat fryer exploded.

He said: “I took the brunt of the explosion, my left arm, back, head and hand were essentially on fire. The pain was extreme, I went into shock.”

Passing holidaymakers, who happened to be paramedics, were the first to attend Scott. He was dosed in cold water, while the air ambulance was tasked to the incident. When the charity’s critical care paramedics arrived, they found Scott was very distressed. They administered strong pain relief before taking him to the waiting helicopter, which landed in St Ives Harbour.

Scott said: “I don’t think you realise how amazing the air ambulance is until you actually use it. When you see it go over, you just hope the person who needs it is OK- you just never think it is going to be you. It’s so reassuring to know that service is there.” 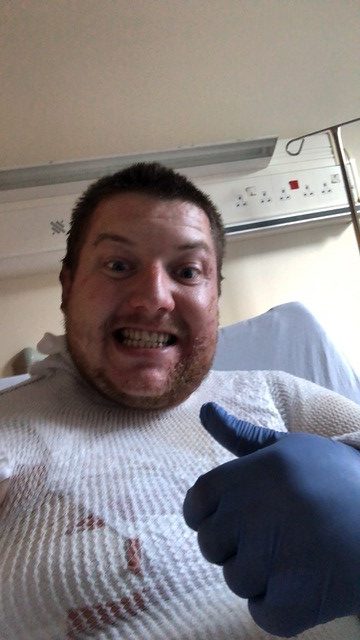 Scott was taken to Derriford Hospital and later transferred to a specialist burns unit in Salisbury, where he underwent skin graft operations. Several months on, and Scott is recovering well and recently managed to return to work before lockdown.

He added: “The speed with which they can get you the treatment you need is amazing, and that’s a big factor in why I have recovered so well. My incident was shown in the TV series Cornwall Air 999 and it helped me to raise around £4,000 for Cornwall Air Ambulance- it’s great to think that will help fund a flight for the next person in need.”