Join a special day and night of fundraising on 29th October

A flight isn't just about the helicopter taking to the skies. It's about the impact that flight has on a patient who desperately needs help. It's about the family that stays together. A flight is potentially a life saved. You can be a lifesaver, help fund a flight by donating or making a bid on the online auction.

We are seeking to raise £5,000 to fund a flight, and ultimately help save the life of someone in critical need.

To support this campaign, and help us reach our target please donate what you can, by visiting our JustGiving page here.

We have a host of incredible prizes donated by the local community and local businesses, from overnight stays with dinner, delicious fudge hampers, and everything in-between.

To see the lots and make a bid CLICK HERE

IN PARTNERSHIP WITH PIRATE FM

You will be able to bid for the following exclusive lots live on air on Thursday 29th Oct.

Breakfast Show with Neil and Lucy, closes at 9.30am.

Daytime in the Duchy show with Scott, closes at 1.30pm

Drivetime with Johnny and Saffy, closes at 6.30pm

These lots will close at the end of each show so be quick to call if you want to get involved.

WITH SPONSORSHIP FROM ANN’S COTTAGE

Thank you to our long term partners Ann’s Cottage who have kindly sponsored this event.

You can find out more about our partnership with Ann’s Cottage here.

HOW ONE FLIGHT CAN CHANGE A LIFE

Nine-month-old Atlas Higgins was airlifted to hospital on Saturday (19 September) after suffering burns from a hot drink.

His mum Kirsty explains what happened.

“On Saturday morning my husband put his fresh cup of tea on the coffee table to sort something out for our eldest son. Our youngest son Atlas was on the other side of the room. My husband heard the splash and then screams.

“My husband rushed Atlas into the bath and immediately poured cold water on to him, while I dialled 999. We could see the skin on his shoulder and ear blistering, it looked like he had pulled the cup of tea down over his right side. It was hard to keep him in a cold bath, he was screaming the whole time, but we knew it would lessen the effects of the burn.”
Cornwall Air Ambulance was tasked to the incident and landed in a field near the family home in St Neot, Liskeard. Atlas was given medicine and taken to the air ambulance alongside Kirsty to be transferred to Derriford Hospital for further treatment.
Kirsty added: “We live in the middle of Bodmin Moor, by road it would have taken 50 minutes to get to the hospital, instead we got there in 9 minutes.

Atlas was seen by the plastics team, who assessed the wounds and dressed them.

Luckily, he was discharged home the same day.

“We can tell he’s in a bit of discomfort, but he is already back to his bright, happy self and we’ve been told his wound should heal in a couple of weeks.”

Kirsty said: “In a split second everything changed. The team were fantastic, we are so grateful that Cornwall has an air ambulance service. Since it is a charity, we just wanted to give something back.” 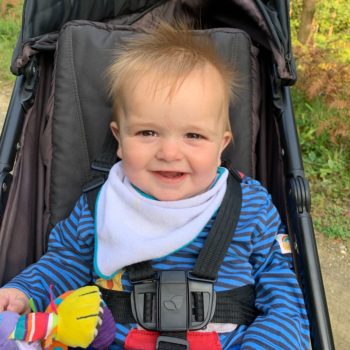 Thank you to our sponsors and donors

We’d like to say a big thank you to Pirate FM for their support in promoting Fund a Flight in a Night.

Thank you to the following fantastic businesses and friends who have donated to the auction. 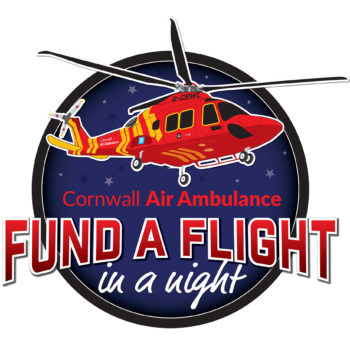