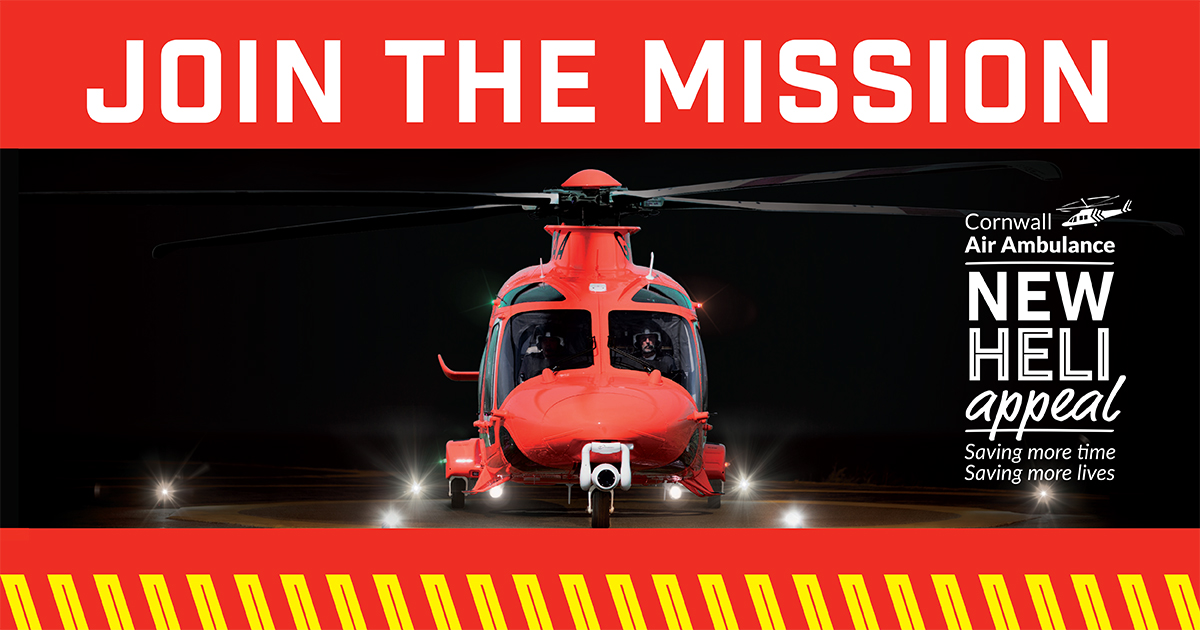 Today we launched launched a £2.5m New Heli Appeal and revealed the model of next generation helicopter chosen to save lives from the skies above Cornwall and the Isles of Scilly for the next 20 years.

Following more than a year of research, the lifesaving charity can reveal it has selected the medically advanced Augusta Westland 169 (AW169) helicopter to become Cornwall’s new air ambulance.

The charity is now embarking on a two-year fundraising campaign, the New Heli Appeal, to urgently raise £2.5m to bring this next generation air ambulance helicopter to Cornwall by April 2020, the date the lease runs out on its current aircraft.

Paula Martin, Chief Executive of Cornwall Air Ambulance, said: “We are asking people to join the mission to bring this next generation air ambulance helicopter to Cornwall – a medically advanced, faster, better equipped helicopter that will change lives every day.

“It will provide our aircrew of critical care paramedics, doctors and pilots with the technologically advanced features and equipment they need to truly exploit their lifesaving skills.

“Put simply, this next generation helicopter will save more time and save more lives in communities across Cornwall and the Isles of Scilly for the next 20 years. It is the air ambulance this county truly deserves.”

The overall cost of an AW169 air ambulance helicopter is £7.5m. The charity has saved £5m towards this already and is now asking the people of Cornwall, and those who love visiting the county, to help raise the remaining £2.5m.

Air Operations Officer Steve Garvey, who leads the dedicated team of Cornwall Air Ambulance paramedics, said: “I have no doubt this next generation helicopter will enable my crew to reach more people and save more lives. It is faster, more powerful and has double the fuel range of our current aircraft, which crucially means it we will be available to fly more missions and allow us to treat more patients.

“Most importantly, it will enable us to recreate a hospital emergency department in the back of the aircraft, enhancing the care we can provide to give our patients an even better chance of survival.

“But we can’t do this alone. We need the people of Cornwall and beyond to join us on what could be our most important mission yet – to bring a next generation air ambulance to Cornwall by April 2020, so we can save more lives for many years to come.”

The New Heli Appeal was launched in front of an audience of more than 100 people during an event at the charity’s headquarters near Newquay, on Tuesday 24 April. An AW169 helicopter was flown in especially for the event to showcase its lifesaving features.

The charity will continue to use its current MD902 Explorer aircraft until April 2020 when it intends to replace it with the next generation AW169 air ambulance helicopter.

To find out how you can support the New Heli Appeal and to make a donation, visit cornwallairambulancetrust.org, or call the Cornwall Air Ambulance fundraising team on 01637 889926.