Jim Richardson has a rare story to tell. He has been air lifted by the Cornwall Air Ambulance on two occasions, for different incidents.

The first incident was 14 years ago, when Jim contracted pneumonia and pleurisy, a condition in the lungs causing a build up of liquid and severe pain.

”I went to the doctors with a bad back ache, thinking I had pulled a muscle. When I got there and they assessed me, they said it was likely to be something a lot more serious. They were concerned about my lungs. My heart rate got faster and faster, and I started struggling to breathe.”

The doctor called for an ambulance. The air ambulance were deployed due to Jim being unable to lie down for extended periods of time and the helicopter could get him to hospital as quickly as possible.

Jim was air lifted to Royal Cornwall Hospital in Truro where he underwent tests.

”They told me it was pneumonia and pleurisy, and that I was lucky to have caught it when I did.”

Jim was put on an immediate and intensive course of antibiotics. His wife, Esther said ”It was all very frightening. It happened so quickly. We didn’t know what was happening, but the crew were so calm and professional. I’m so grateful for their incredible help in getting Jim to hospital. They probably saved his life.” 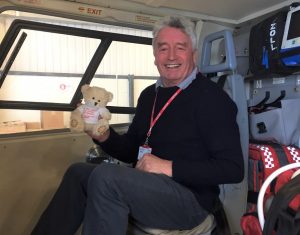 Jim’s second incident was in March of 2016. He was chopping some wood with his chop saw when he had an accident which has changed his life.

”I had just finished chopping some wood for a friend and without thinking, I reached in to get the material a little early.”

Jim’s hand was sliced across three of his fingers.

”My first finger was sliced through, and the second was badly broken. Luckily, the blade hit my wedding ring which probably saved my third finger from too much damage!”

Esther called for an ambulance, and within minutes a first responder was on scene. She assessed Jim’s hand and told him he would likely lose the damaged fingers. Due to the extent of the damage and blood loss, it was determined the air ambulance would be needed to get Jim to the hospital quickly to save as much of his hand as possible.

”Jim was strangely calm to begin with” said Esther, ”But then all of a sudden he changed.”

Jim went into shock before the air ambulance arrived, so the first responder started driving him to Derriford Hospital.

The air ambulance met them on Davidstow airfield, where Jim was transferred to the helicopter and taken straight to the hospital. A specialist hand surgeon was waiting for them on their arrival, and Jim was assessed straight away.

”The surgeon was confident he could save most of my hand, and I went into surgery soon after.” said Jim.

Jim had to have two four-hour operations on his hand and spent a total of five days in hospital. The damage to his hand was severe and he is left with his index finger shortened, and a large amount of scar tissue restricting his movement. However, he is still able to work with his tools and has recently been helping his daughter and her husband renovate their house.

‘’We live in a very remote area, at least an hour drive from any hospital. Thanks to the air ambulance I got to hospital in around 20 minutes which almost certainly saved my hand. I can’t thank them enough for the incredible work they do.’’