Following years of significant and influential work for Cornwall Air Ambulance Trust, Barbara Sharples has been formally recognised and appointed as Vice President for the charity.

Barbara takes up the new position alongside her role on the charity’s Philanthropy Forum, which she founded and which comprises high profile fundraisers who generate around £400,000 each year for the Cornwall Air Ambulance Trust.

In addition to this work, Barbara has served as a trustee since 2017 and was Chair of the New Heli appeal board which raised a staggering £2.9 million towards the cost of its latest AW169 life saving helicopter. Barbara was also a founder and member of the London committee, engaging supporters outside of the county with connections to Cornwall. She also founded the ambassador programme, introducing celebrity ambassadors Richard & Judy alongside other high profile ambassadors who have helped to gain additional exposure and awareness of Cornwall Air Ambulance Trust. 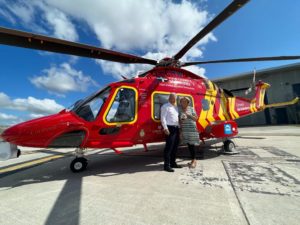 Speaking about the appointment, Chairman of Trustees for Cornwall Air Ambulance Trust, Mark Carne CBE said “We are delighted and honoured that Barbara has become our Vice President. Barbara is already a legend within the charity, having been at the forefront of our fundraising efforts for many years. I have no doubt that she will bring her unique energy to this new vital role and I look forward to working with her.”

Chief Executive for Cornwall Air Ambulance Trust, Tim Bunting echoed these sentiments saying “Barbara represents everything which is great about Cornwall Air Ambulance. Her hard work and determination to see this charity succeed has meant that we are now better equipped than ever before to respond to the 1,110 plus missions that we are called out to across Cornwall and the Isles of Scilly each year. On behalf of all those patients and families we have been privileged to support, we want to say a massive heart-felt thank you.”

New Vice President, Barbara Sharples said “Cornwall Air Ambulance saves lives everyday. The charity keeps families together, nothing is more important.  It was a privilege and honour to serve as a trustee and work alongside the amazing team and crew of the charity. To be recognised in this way and to represent the charity in this new role is the greatest honour. I look forward to continuing to serve and would like to thank the charity for their faith and trust in me over the years.”

Barbara who will be stepping down as Trustee to fulfil her new role, is an ex Managing Director of The Body Shop International and of Dorling Kindersley Publishing. More recently Barbara ran her own successful consultancy business. A judge for Cornwall Business awards for 3 years, she is a passionate supporter of women in business and was proud to mentor the founder of The Aspire Foundation helping women and girls globally to achieve more business, social and economic freedom. Barbara has also held non-executive advisory roles.