Diners at a lunch hosted by New Heli Ambassadors Richard Madeley and Judy Finnigan raised an incredible £21,171.25 on Saturday 27 April through generous donations and auction bids.

The event, held at and supported by the luxurious four-star Talland Bay Hotel, featured a seven-course lunch with local food generously donated by suppliers as well as an auction with top prizes including a unique opportunity to have a walk-on role in the next series of BBC’s Doc Martin. 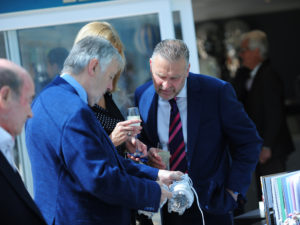 TV stars, Richard and Judy, shared some anecdotes from their long careers and answered questions from the guests, including their most inspiring interviewees and how they chose the books to include in their hugely-popular book club.

During his talk, Richard reiterated their support for the New Heli Appeal. He said: “This could not be a more human fundraising appeal. The helicopter could be used by absolutely anybody, so we are fantastically pleased to support this Appeal.” 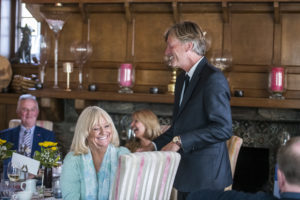 Barbara Sharples, Chair of the New Heli Appeal Board and organizer of the event, said: “The lunch which we held on Saturday was simply amazing. Chef Nick Hawke & team served seven superb courses, all delivered with style & warmth by team Talland and all delicious, a feast for the eye and taste buds! The guests, some from out of county, generously bid at the auction, ensuring that the event in total raised £21,171.25 for the New Heli Appeal.

“A special highlight was a talk by mother Sonia Rees who shared her passion for the charity by relating the story of her son Rory, who experienced serious injuries after an accident, speaking of the skill of the amazing paramedics that day.

“All ingredients and wine for the meal were generously donated by suppliers free of charge. On behalf of the New Heli Appeal my sincere thanks and huge congratulations to Kevin & Teresa, owners of the hotel, Jack, Lucy, Nick and the amazing team at the Talland Bay Hotel for delivering a unique experience on Saturday and for their ongoing support to the appeal.” 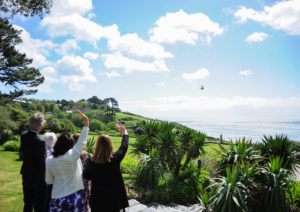 To find out how you can join the mission to bring a next generation air ambulance to Cornwall and the Isles of Scilly by supporting the New Heli Appeal, visit cornwallairambulancetrust.org/appeal.