October proved to be another busy month for the crew of Cornwall Air Ambulance, carrying out 68 missions across Cornwall and the Isles of Scilly to treat those in need of urgent medical care, in some of the most isolated regions of the UK.

Medical emergencies accounted for 41 missions, including 19 people suffering from heart related problems. There were also 23 missions to people who suffered serious trauma injuries, including road traffic accidents and falls while 9 incidents involved children.

Following on from the busiest Summer on record for Cornwall Air Ambulance, October showed no signs of slowing down as the charity looks set to fly more missions in 2018 than ever before in a calendar year.

Each year, the crew of Cornwall of Air Ambulance carries out more than 700 lifesaving missions, costing an average of £4,000 per mission. The charity doesn’t receive any government funding towards its running costs and so relies on donations to carry out its work. You can help save more time and more lives by donating here. 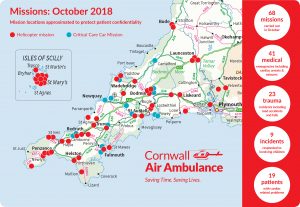