A granddad has celebrated what he’s calling his ‘third birthday’, three years after suffering a cardiac arrest and being airlifted by Cornwall Air Ambulance.

Alan Tebbit was driving a school coach between Veryan and Tregony on 18th November 2019 when he collapsed behind the wheel.

The coach crashed into someone’s garden wall and Alan had technically died at the scene. Local people rushed to help and all the children were safely evacuated from the vehicle, luckily none of them were seriously injured.

Alan was given CPR and one person managed to get a defibrillator from a nearby garage, so he could be shocked. Members of the public helped out until the Cornwall Air Ambulance critical care paramedics arrived.

The crew treated Alan and airlifted him to Treliske Hospital in Truro, where he remained in an induced coma for four days.

He had a battery-operated defibrillator fitted along with a pacemaker, and has since made a good recovery. To this day Alan has not had any further problems with his heart.

Alan said: “They were incredible, both Cornwall Air Ambulance and the NHS. I wouldn’t be here today if it hadn’t of been for those wonderful people.

“I wake up every morning and just give thanks for the wonderful people who brought me back, if I hadn’t of survived I would never have met my grandson Harvey, who is such a lovely little boy and such a big part of my life. Life is just wonderful and here I am.

“I don’t know if I would have survived the land journey, that time on a Monday morning with the traffic problems, it would have been a long and arduous journey. All the life saving equipment on the helicopter kept me alive for that journey. As the saying is, it’s the one helicopter we want to see flying but you never want to be in it. But I have been in it, and I’m here to tell everybody.”

Alan now celebrates his unofficial birthday each year by bringing in a cake to Cornwall Air Ambulance HQ near Newquay, for the crew and staff. This year he is celebrating his ‘third birthday’.

He added: “We brought one in last year, it just seemed if I wanted to have a cake for my unofficial birthday then it should be shared with the people responsible for me being here. So we just love to bring one in and see the staff and say thank you, although however many times I say thank you it will never be enough to convey how I feel.

“The service is worth every penny that I can save up and give, to keep the helicopter flying and hopefully save more lives.” 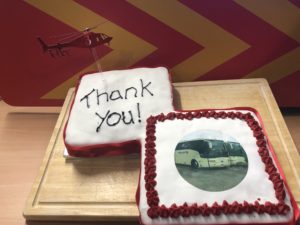