On the 21st October 2021, Angharad Elliott was on a family holiday when she suddenly suffered a seizure on the Cornish coast path, and fell 40ft from the cliff into a ravine below.

22-year-old Angharad, who suffers from severe epilepsy, had been out for a day at the beach with her mum Jo, dad Adam and brother Kit. The four of them were walking between Nanjizal and Land’s End, a stretch they know well, heading back to the car. Jo had been leading the way, she turned round wondering where everyone was. “Adam was just standing there paralysed”, she said. “He said she’s gone over the edge, she’s gone over the cliff”.

Jo started running up and down to see where Angharad had fallen. She said: “I spotted her in a rock pool, it was shallow but her head was only a few inches from the water, her body was lying in the water, and it was dark red with blood.” Looking for a way to get down, with the treacherous cliffs covered in loose rock, Jo started to clamber down a dangerous route, over a 40-to-50-foot drop. She managed to get down to Angharad, while Adam and Kit stayed at the top of the cliff to call for help.

Jo said: “It felt very lonely and you feel very abandoned, you can’t see or hear anything, you’re just there with your daughter’s body against your chest, both covered in blood, and just wondering what on earth would happen, then the sea started coming in.”

Another walker, Nathan, had spotted what was happening and managed to find an easier route down to Jo and Angharad. He stayed with them and helped as much as he could until emergency services arrived. 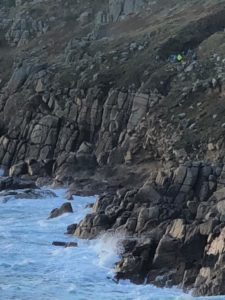 Cornwall Air Ambulance was tasked to the scene, with Critical Care Paramedics Lisa Ball and Pete Storer on board. As they flew overhead, they managed to locate the patient, but due to the steep cliffs on either side couldn’t land nearby, and instead had to land in a field high above the beach, which is notoriously difficult to access. They made a dynamic risk assessment and judged the uneven terrain would make it too dangerous to carry their 20kg kit bags to the scene. Instead, they grabbed vital drugs and left the rest of the kit on the coast path. In order to get to the patient, Lisa and Pete had to climb down to the beach then scramble across the rocks.

Within minutes the ravine Angharad was lying in was flooded with water. They quickly moved her a few metres further from the incoming tide. With the water levels rising, the crew wanted to reach a dry area high enough from the water that would enable them to carry out an assessment. However, this area was soon flooded too, and once again the paramedics moved the patient to a nearby ledge. Jo said: “We would have drowned if they didn’t come, there’s no way I would have left her, no one would have abandoned their child in that situation, I really do owe them my life”.

With the weather conditions and sea state worsening, rather than being able to treat her on scene, the main priority was to safely evacuate Angharad as soon as possible. Due to the remote location, the crew had no communication with the South Western Ambulance Service control room or the Cornwall Air Ambulance helicopter pilot. They could only communicate with the coastguard via radio. There was no sign yet of the coastguard helicopter, which would be able to winch them directly from the scene.

In less than 20 minutes, the waves were crashing over the ledge. With the situation becoming more precarious by the minute, the crew had to make a quick decision whether they would stay with Angharad and Jo or evacuate.  An impossible situation to find themselves in; they knew if they left, they would both drown. Pete and Lisa thought first of the patient and made the decision to remain on scene, despite the risk to themselves. They stood between the crashing waves and the patient, using their body weight to pin them down to the rocks.

Lisa Ball, Critical Care Paramedic, recalled: “We were sheltering behind rocks with waves crashing over us all. We were using all our strength to hold them in place, if we didn’t, they would have been washed into the sea. The conditions were getting worse, no one would have got into that water and come out alive. The power of the waves would have thrown us against the rocks. Pete and I looked at each other, we work together a lot, and we both knew what the other was thinking. We couldn’t leave them.” 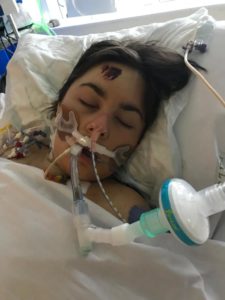 “There were at least two occasions where a wave came in and I was literally being swept off”, said Jo. “Pete put his arm out to grab me each time to catch me, if he hadn’t of done that I would have been in the water. I do credit him with saving my life, on a number of occasions.”

By this time it had been nearly an hour on scene, and everyone was soaked through. When the Coastguard Search and Rescue helicopter arrived, Angharad was winched directly from the rocks, followed by Jo and Lisa. Once they were in the aircraft, despite being hypothermic herself, Lisa attended the patient, monitoring her vital signs and giving her oxygen. Pete was the last to be winched into the helicopter, once on board he contacted the team at Royal Cornwall Hospital to update them on the patient’s status. Rather than go to the major trauma centre in Plymouth, the decision was made that Angharad needed rapid stabilisation for traumatic injuries at the nearest hospital. Lisa and Pete accompanied the patient to the emergency department to give a full handover.

Angharad had suffered a cracked skull at the back of her head, a big wound on the front of her head, her lungs had collapsed, she had three crushed vertebrae in her spine, her pelvis had come off her spine, she suffered multiple fractures in her feet, and a knee ligament was ruptured.

As she was being prepared for surgery, she suffered a cardiac arrest and was revived by the hospital team. She spent nine months in hospital, during which time she underwent multiple surgeries. 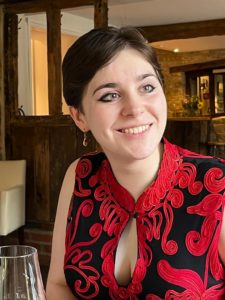 One year on, and now 23, Angharad is still recovering. She still struggles to walk long distances without being in pain and is waiting on another operation. Remarkably the incident has significantly reduced the number of seizures she suffers every month, from around 20 to just two.

Reflecting on what happened that day, Angharad said: “I don’t remember it at all, I remember the day before and then 10 days later. I find it interesting knowing what happened, I’m not scared of it, it doesn’t upset me, I just think it’s amazing that I did survive it and that people helped me, I’m very lucky. With severe epilepsy I’ve learnt to deal with things very well.”

Jo added: “People say ‘weren’t you scared?’, I don’t remember being scared as there isn’t enough space in your mind, you’re just focussing on your daughter, all I could focus on was she was there, conscious, and still breathing.

“Seeing Pete and Lisa, I don’t want to use this word loosely, but they were like angels walking along. Those guys came down despite the sea coming in, the extraordinary courage that they showed, and at no point did I get the sense they would leave us. Around 30 seconds after Pete was winched by the helicopter the rock was covered with water. I feel very humbled that they cared so much about us. If they didn’t come, we would have drowned without a doubt.

“Every time I think about Pete and Lisa I cry, out of huge appreciation and admiration. They didn’t have to come, they should have left when they were in danger, but they didn’t. They were so brave walking into a scene of great danger and then not abandoning us. We owe them everything”.

Following the incident, Lisa and Pete had a debrief with the team from the Coastguard Search and Rescue who told them their actions that day “undoubtedly saved two lives”.

Lisa said: “After the incident we did reflect on the situation we were in, and it does make you think what could have happened. But when you are with a good crew mate, you trust and support each other and remain calm, that’s what got us through.”

Jo and Angharad are planning to visit Cornwall again next year, and to thank Pete and Lisa in person.