When cyclist Jamie Denton set off on a Land’s End to John O’Groats adventure, he didn’t expect to need Cornwall Air Ambulance on the very first day.

The dad-of-two decided to take on the challenge with a group of friends on 4th September 2021, and had made it as far as Bodmin when he was caught in a head-on collision with a car on a narrow country road.

They had cycled around 100 kilometres and were heading down a descent when the vehicle came round the corner at the same time. Jamie hit the car and bounced off it, skidding down the road. 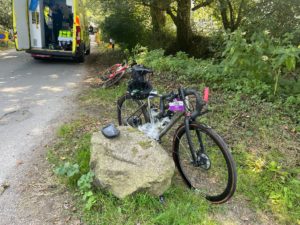 Cornwall Air Ambulance was tasked to the scene, with Critical Care Paramedics Paul Maskell and Thomas Hennessey Jones onboard your AW169 helicopter. Jamie was airlifted to Derriford Hospital, the South West’s major trauma centre based in Plymouth.

Jamie said: “The first I knew of the helicopter was a WhatsApp video that someone sent me. I remember nothing from about 10 minutes before the accident until about a week after, when I woke up.”

He suffered broken ribs, spinal damage, a broken collarbone and a broken finger, along with suspected brain damage.

Jamie was in an induced coma for a week and spent one month at Derriford in total. He was then transferred to his local hospital in Woking for the rest of his recovery for a further two weeks.

He said: “The first week it was such a shock, but once you get over the initial ‘what an earth has happened’ it gets better.”

Jamie was off work for six months and has since completed a phased return. He has also had a few operations since his incident but is now back cycling again. At first he struggled with descents again but has overcome his fear.

“It was almost demons of my own making, there’s nothing to be angry with anyone about, it’s just weird as I don’t remember it. It’s the not knowing that’s made dealing with things a little bit weird”, said Jamie. 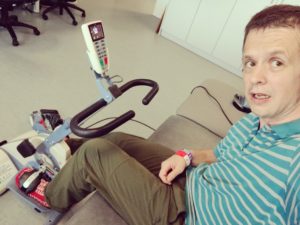 A year on from the crash, Jamie has signed up to take on the same Land’s End to John O’Groats ride in 2024, saying “It’s not going to beat me”. In around three months’ time he is also due to take on a similar challenge in South America, cycling from Santiago in Chile down to Buenos Aires in Argentina.

Now Jamie has thanked the crew of Cornwall Air Ambulance for getting him the treatment and help he needed.

Jamie added: “The hospital did an MRI scan and saw some level of some form of brain bleed. If the Cornwall Air Ambulance hadn’t got there as quick as it did, it could have been so much worse.

“The service is vital, these things can happen in so many places that are not easy to get to. I just look and think if that had happened earlier on, I dread to think what the impact would have been.”