It was three weeks before Christmas in 2010 when dad Mark Morcom suffered a spinal cord injury which would completely change his life.

It was 4th December and Mark was helping out a neighbour with a few jobs around his home in Fraddon. The 35-year-old was in the loft space when he fell down onto the concrete below, landing on his back.

“I touched my legs and I couldn’t feel them, and thought something serious has gone wrong”, said Mark.

His neighbour’s nephew was there and called 999, and Mark managed to call his wife at the time to let her know he’d had an accident.

It was a snowy and icy day, a paramedic arrived at the scene in a car and Cornwall Air Ambulance was tasked to the scene, with critical care paramedics Mick and Steve on board.

Mark said: “When I knew the air ambulance was coming I felt a big sense of relief. You could hear the helicopter coming, you could really hear it.

“It just seemed like no time at all before I was taken away in the helicopter, I can’t remember much of it as I was sleepy because of the drugs, but I remember arriving at Derriford.”

Mark knew what was happening to him was really serious. He was told that if he landed awkwardly, he might have a spinal shock injury and at the worst, he could have broken his back. Unfortunately, it was a broken back that he had suffered. 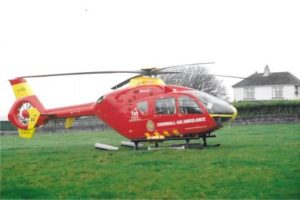 Mark received pain relief and was airlifted to Derriford Hospital in Plymouth, which is Devon and Cornwall’s major trauma centre.

He had suffered a complete spinal cord injury right in the middle of his back, in the T10 spinal nerve. That had caused complete paralysis from that part of Mark’s spine down, meaning he would be in a wheelchair for the rest of his life.

Mark had surgery and his spine was stabilised. He was transferred to the Royal Cornwall Hospital, then up to the spinal unit in Salisbury. He spent over four months in hospital in total.

Before his accident, Mark was a pretty active guy, having worked in the building trade. Following the accident, everything changed. “I couldn’t get into the car properly, or into bed or the bathroom”, said Mark. “Home was the best medicine for me and being away from my daughter was a real challenge”.

“After a while I started getting confident in myself, I started driving again, started getting independent where I didn’t need anybody’s help, I had some adaptions carried out at home and joined a charity called Back Up. I did kayaking and sailing with them, and flew to Edinburgh for a city challenge.

“In 2017 I bought myself an old rear engine VW camper, and in 2018 I went down through France and down to the south of Spain on my own. My brother helped me adapt it, so I can get in and out of the side door using a lift. I’m hoping to go back down to Malaga this February with my girlfriend.” 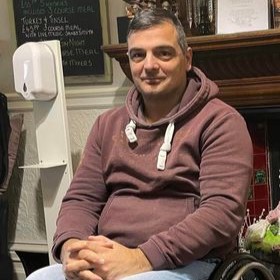 Now 12 years since his accident, Mark says he lives a full life, doing nearly everything that he did before, but still always thinks of 4th December each year in the lead up to it.

“Without the air ambulance I would have had to travel all the way to Plymouth by land”, said Mark. “It’s so important that we’ve got it, especially as it’s a charity. I was really glad it was there and able to come and get me. It’s a shame I needed it, but I’m very lucky I was able to use it.”

You can help Cornwall Air Ambulance save more people like Mark here.