A mum from Camelford is set to take on a big bucket list challenge to raise money for Cornwall Air Ambulance 10 years after her son was airlifted.

Nine-year-old Nathaniel Hockerday had been playing with friends on the Tintagel playing field on 4th May 2013, seeing how high they could throw each other into the air. Nathaniel came down and landed badly on his left arm.

It was a bank holiday weekend and took around an hour for a land ambulance to arrive. It was decided that Nathaniel’s arm was too unstable for him to be transferred to hospital by road, so Cornwall Air Ambulance was called to the scene. He was airlifted to the Royal Cornwall Hospital in Truro where he had surgery that night. 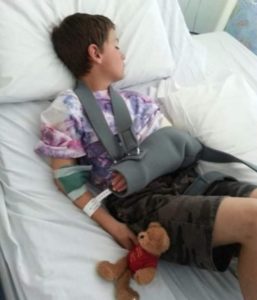 Nathaniel in hospital with his teddy bear, given to him by the Cornwall Air Ambulance crew

Mum Bronwen said: “I get emotional, because as a mum I wasn’t there, I literally got to Treliske as the helicopter was landing. The guys brought him in and they were amazing, they were so good with him.”

Nathaniel was in the operating theatre for two hours; he had broken his arm just above his elbow and had to have it pinned back into place. He was discharged the next day and his recovery took around four months in total, involving lots of physiotherapy. Nathaniel, now 20, still can’t extend both his arms the same but it doesn’t affect him in his day-to-day life.

“Having the air ambulance made a huge difference, if he’d been transported by land he may have lost his arm”, said Bronwen. “Apparently there’s a really important blood vessel in your elbow and if that gets compromised it can affect the blood flow to the hand. We didn’t know until after he’d come out of surgery that it was that severe a break. Having the Cornwall Air Ambulance, I don’t know what we would have done without it. It is absolutely vital for rural communities.” 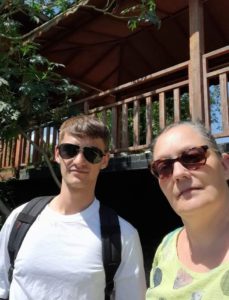 Now, as a 50th birthday present from her husband, Bronwen will be doing a wing walk at Dunkeswell Airfield in Devon, to raise money for Cornwall Air Ambulance.

She said: “Everyone has a bucket list, and a wing walk was on mine, as a surprise my husband has arranged for me to do one. I’m excited and I’m nervous, but I’m determined to do it, because we owe such a debt to Cornwall Air Ambulance for the help they gave Nathaniel, and I just want to give something back. It’s a charity that’s very close to our hearts.”

“On the day, I will be strapped into a cradle on the top wing of a biplane, and I think it goes up to 300mph”, she said. “Family and friends are coming to watch.”

To complete the wing walk Bronwen needs to raise £600 but she is hoping to smash that target. She is planning to arrange a quiz night in the new year to help raise the funds.

You can find Bronwen’s Just Giving page and support her wing walk here.