Cornwall Air Ambulance is appealing for more support as the charity looks set to have one of its busiest years.

New figures reveal that from January-August Cornwall Air Ambulance flew 544 missions compared with 465 emergency missions during the same period in 2017. The critical care car has been on 215 call-outs so far this year.

Throughout the year, the crew of Cornwall Air Ambulance have attended 414 medical incidents and dealt with 342 trauma related injuries.

The lifesaving charity, which relies on donations to fly, predicts that the end of year total will be around 800 helicopter missions, with a further 400 emergency responses carried out in the critical care cars.

Cornwall Air Ambulance Chief Executive, Paula Martin, said: “The pressure on Cornwall Air Ambulance as a small local charity to deal with serious incidents has increased significantly this year. Meeting this additional cost, at the same time the charity is trying to save for a new generation air ambulance, is very hard, so we urgently need your support.”

This year, fantastic weather and exceptional tourist numbers, have added to the charity’s workload over the summer season. In the peak visitor months of July and August 2018, missions increased by nearly 40% compared to the same months in 2017, increasing from 173 to 241.

To help cover the costs of the extra missions, the charity is launching a campaign to generate more donations through the tourism sector. 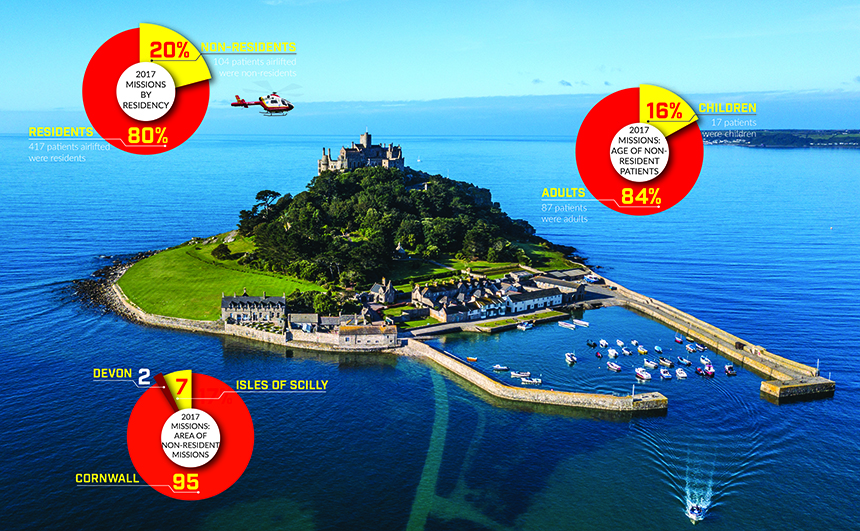 Paula continued: “While four out of five patients are local people, one fifth of our work is to help seriously sick and injured tourists. Last year, more than 20% of airlifted patients were tourists, yet less than 5% of donations to the charity came from the tourism sector.

“We are hoping to substantially increase the donations from both tourism businesses and their customers year on year, to meet the increased costs of trying to save lives when things go horribly wrong while people are on holiday. The charity is now appealing for tourism businesses to get on board with this campaign and make sure we can save more time and more lives in the years to come.”

The charity has recently trialled a new scheme with accommodation providers to ask customers to donate at the point of booking a holiday. More than 40% of families opted to make the donation and Cornwall Air Ambulance is now rolling out this scheme and other initiatives to businesses across the tourism sector.