Cornwall Air Ambulance is set to go head-to-head with a fellow air ambulance charity for its first ever charity football match.

Patients, paramedics and those with a connection to Cornwall Air Ambulance will join forces to take on the team from Thames Valley Air Ambulance.

The inaugural game, which will take place on Saturday 21 May 2022 at Troon AFC’s Grouter Park, aims to raise money and awareness for the work of both lifesaving charities.

Team members include Scott Halliday who was airlifted in 2020 following a kitchen fire in St Ives and a member of the Boxall family, supporting the charity after a serious incident involving Olivia Boxall in 2019.

Stuart Beveridge, Communications & Marketing Manager at Cornwall Air Ambulance, said: “It is hugely exciting to organise this charity football match and to see former patients pull on the red and black kit of Cornwall Air Ambulance FC. This is what the service is all about, helping people in their hour of need and giving them the best possible chance of living their life as normal. This is a fantastic opportunity to support two air ambulance charities and the countless lives they will save across their regions. We hope to see a big crowd on the day!”

The opposition side, Thames Valley Air Ambulance FC (TVAA FC), was formed in 2017 to raise money in memory of four-year-old Barnaby, who sadly lost his life following a tragic incident in Thame, Oxfordshire.

Five years on TVAA FC are still playing charity football matches and have raised almost £40,000 for the Thames Valley Air Ambulance, which serves the people of Oxfordshire, Buckinghamshire and Berkshire.

Stuart Gibson, Founder of TVAA FC, said: “Over the last couple of years we have adopted a new approach with a focus on playing football against fellow charity teams, again this helps support and raise awareness for our opponents’ charities along with keeping our team and the Thames Valley Air Ambulance in the spotlight. We are looking forward to taking on the team from Cornwall Air Ambulance on their home turf.”

Get your tickets for the match here. 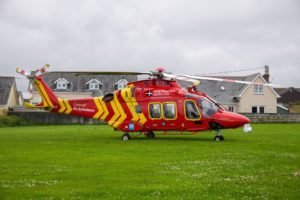