It has been a busy year for the Cornwall Air Ambulance crew who were tasked to 1,050 incidents during 2022.

New figures released by the charity show 462 of these missions were to people injured in trauma-related incidents and 254 were in response to medical emergencies.

The team of Critical Care Paramedics were called out to 330 cardiac arrests across the year.

2022 was also the second year that your crew have carried blood products, with 14 blood transfusions being carried out. Seven of these were on the aircraft and seven via the rapid response vehicles. 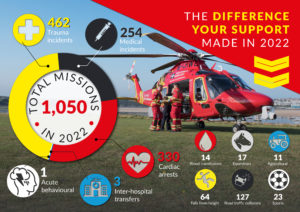 Tim Bunting, Chief Executive at Cornwall Air Ambulance, said: “2022 was another busy year for your charity, not only in incident numbers, but across the board. We introduced two new rapid response vehicles, building work started on the extension to our HQ building, we launched our first blue light festival Helifest, and welcomed a new pilot to the team, to name a few things.

“Figures remained high, and your crew would not have been able to attend those missions without your support. We rely on the generosity of you, the people of Cornwall and the Isles of Scilly, and beyond, to keep your helicopter flying and saving lives. I would like to thank each and every person who supported us through 2022.”

You can help save lives and support Cornwall Air Ambulance here.