Cornwall Air Ambulance will join other air ambulance charities across the UK to celebrate Air Ambulance Week 2020 from 7-13 September. The start of the week was marked with an open letter from HRH The Duke of Cambridge who thanked staff, volunteers and supporters for helping to keep the helicopters flying. 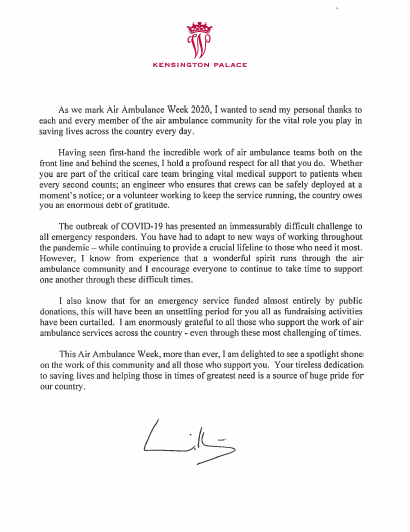 The ‘Because Every Second Counts’ campaign highlights how the UK’s 21 air ambulance charities save lives every day by rapidly bringing highly advanced hospital-level critical care directly to the side of the most critically injured or ill, when every second counts towards survival.

Air ambulance charities have played a vital role in the frontline emergency response to COVID-19, with their critical care skills in much demand. During this time they have also continued their daily lifesaving missions right across the UK, despite a significant drop in donations as the economic effects of the pandemic take hold.

Cornwall Air Ambulance, along with the other air ambulance charities, relies on public donations to carry out its lifesaving missions. And so, now more than ever, the charity needs your support.

Every penny and every second counts towards air ambulance charities saving the lives of the most critically injured and ill people every day across Cornwall and the Isles of Scilly.