A man from London has set himself the adventurous challenge of crossing the English Channel on a stand-up paddleboard to raise money for Cornwall Air Ambulance Trust (CAAT).

Charlie Beamish is taking on the task in November alongside his friend Major Jen Price, who is taking part in a series of 12 extreme endurance challenges across 2022, to raise money for the Veterans’ Foundation.

The distance is 25 miles as the crow flies, Dungeness to Boulogne-Sur-Mer, but they will be paddling just under this due to restrictions around crossing shipping lanes.

Charlie decided he would join Jen and raise money for Cornwall Air Ambulance, after a colleague’s son was airlifted several years ago.

Harry, who was five at the time, was on a family holiday in Cornwall when a trip to the coast turned into a lifechanging experience.

He was excitedly heading towards Trevone Beach when he suddenly fell over the side of the cliff and six metres onto rocks below. Luckily he landed on top of his bodyboard, but he suffered a serious head injury in the fall.

Emergency services were called to the scene, including the Cornwall Air Ambulance helicopter, which airlifted Harry to Treliske Hospital. He was later transferred to Bristol Children’s Hospital for emergency surgery and further specialist treatment. Doctors told the family to prepare for the worst as they were unsure whether he would survive his injuries.

Harry underwent a four-hour operation, which his parents were told could leave him with cognitive issues or personality changes. He spent eight days in a coma and in the months that followed he had a titanium plate inserted to reconstruct the damaged part of his skull. Luckily, Harry has since made a full recovery.

Harry’s dad Dave works with Charlie, who has seen first-hand how vital the Cornwall Air Ambulance is in someone’s time of need.

Charlie is raising money for the charity by stand-up paddleboarding the English Channel, which is the busiest shipping lane in the world. It is estimated the challenge, which will take place at some point between 4th and 8th November, will take them around six to eight hours to complete. A support boat will travel alongside them.

Charlie said: “Training wise I am working pretty much exclusively on balance, back and core strength, the distance is around 18 miles but it depends on if the tides become difficult, and it could be up to 25 miles in total. I’m running a half marathon, I’ve got a half ironman triathlon, with is another endurance event, and essentially I am preparing my body for a whole day of standing up paddleboarding whilst also trying to eat, rest, stay hydrated and potentially deal with terrible weather.

“I’m looking forward to the minute I lose sight of land, then you know you’re halfway there and committed to completing it. I think the biggest challenge will be the sea state, the waves, the choppiness, and the wind, and also maintaining a good mental attitude while on the board.” 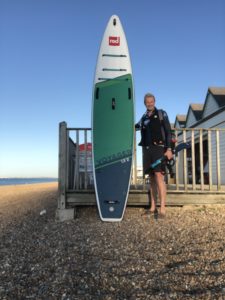 He added: “Seeing Dave go off for a period of time and then hearing the stories of what happened and how he felt and the emotions he went through, I have a real appreciation for him as a father figure. Hearing how vitally important the air ambulance was in saving Harry’s life was the biggest thing for me, I know he probably wouldn’t be here if Cornwall Air Ambulance wasn’t around.”

Charlie is aiming to raise over £2,000 for Cornwall Air Ambulance Trust.

You can support his fundraising appeal here.