It was a wet and windy autumnal day 25 years ago when golfer Steve Burrows, from Falmouth, found himself in need of the Cornwall Air Ambulance helicopter.

Steve was at Carlyon Bay golf course with two friends, Jim and Malcolm, for a bank meeting back in 1997.

Already running late after forgetting his golf shoes and then stopping to help somebody with a broken-down car, he was finally on the course and ready for action despite the awful weather.

The group had made it to hole five, and Steve had already told his friends to be careful of stray golf balls being hit in the poor conditions.

It was at that point he heard someone shout ‘four’ but before he could even think about it, a golfer driving from about 50 to 60 yards away had hit the ball, and bang.

“I can’t remember much, but I was lucky it hit the side of my head under my eye and not my temple”, said Steve. “You think that’s it; I’d been hit twice previously in the head already and the land ambulance had to be called that time.”

Steve’s friends called for help and a land ambulance was dispatched to the scene, but due to the weather conditions it slid down the hill and couldn’t grip, unable to access the course and get to Steve.

The Cornwall Air Ambulance was tasked, and Steve was airlifted to the Royal Cornwall Hospital in Truro. 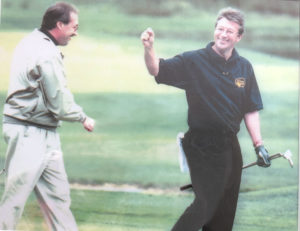 Steve said: “I sort of remember what was going on. I remember them talking to me, I think. I do remember the noise, and I don’t like heights.

“I was airlifted to Treliske and I do remember hearing a ‘boing boing boing’ as a golf ball fell out my pocket and rolled down the room in the hospital. I’m so lucky it missed the temple, as that would have been it. I was quite poorly for a little while, but I count my lucky stars really.”

Luckily Steve’s eye socket bone was not broken, but he did suffer a large amount of bruising, and was left feeling jumbled for quite a while.

Speaking about the importance of the Cornwall Air Ambulance that day, Steve added: “I think it probably saved my life. Certainly, I’m sure it made a massive difference to me, I guess I possibly wouldn’t be here if they hadn’t been called.

“It is an asset to this county; everyone needs to realise just how important it is.”

In the years since his accident, Steve has gone on to raise thousands of pounds for Cornwall Air Ambulance Trust (CAAT). In 2004, as captain of Falmouth Golf Club, he selected CAAT as their chosen charity and raised several thousand pounds. Steve’s good friend Lucien Trathen, who was President of the golf club in 2014, also chose CAAT as his chosen charity to raise money for. Most recently, now as President of Falmouth Golf Club himself, Steve raised £2,140 through the President’s Day and came to CAAT’s headquarters near Newquay to deliver the cheque. 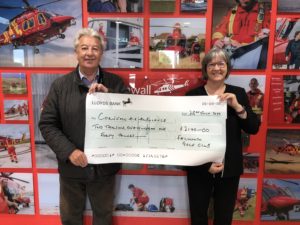 Steve says he will continue to support the charity in the years to come: “It’s a cause you hope you never need, but you may do one day.”