Cornwall Air Ambulance ambassador Richard Madeley has made a visit to the charity’s HQ near Newquay to meet staff and crew.

Both Richard and his wife Judy Finnigan share a love for Cornwall and as advocates for Cornwall Air Ambulance Trust, they help shine a spotlight on the charity’s lifesaving work and help to raise vital funds.

In October 2022, Richard appeared on a celebrity special of Who Wants To Be A Millionaire? on ITV, where he reached the incredible £125,000 milestone. The cash Richard raised was shared equally between his two chosen charities, with £62,500 coming to Cornwall Air Ambulance. 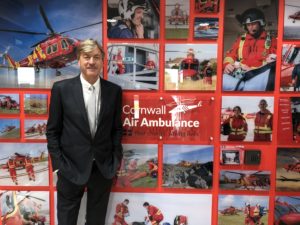 Speaking about his support for the charity, Richard said: “They’re such a great team of people, meeting everyone who makes this thing fly, they’re an interesting and dedicated bunch of people. It’s a very dynamic place to be, I’ve seen the helicopter take off twice here this morning already, it’s a very exciting place.

“Cornwall because of its topography and its coastline can be tricky to get paramedics and ambulances out to emergencies, it’s a tricky landscape. Without a helicopter ambulance service, the time that it could take could prove to be fatal. The helicopter and crew genuinely save lives, not just by getting patients to hospital but by giving them care there and then. It makes an absolute difference.”

Barbara Sharples, Vice President at Cornwall Air Ambulance, said: “Richard and Judy were our first ambassadors and have enthusiastically supported your charity since 2018. They were incredibly supportive during the New Heli Appeal, which raised £2.9 million towards your AW169 helicopter. Here at Cornwall Air Ambulance, we feel very fortunate for both Richard and Judy’s commitment, and they will always be warmly welcomed at the airbase.”

Be the difference – when time is everything. You can help support Cornwall Air Ambulance here.